Bangkok's condo market revived in the first quarter, with newly launched supply and the sales rate soaring to the highest level in several quarters, according to property consultant Colliers Thailand.

Most New Condo Launches Since Q3 2018 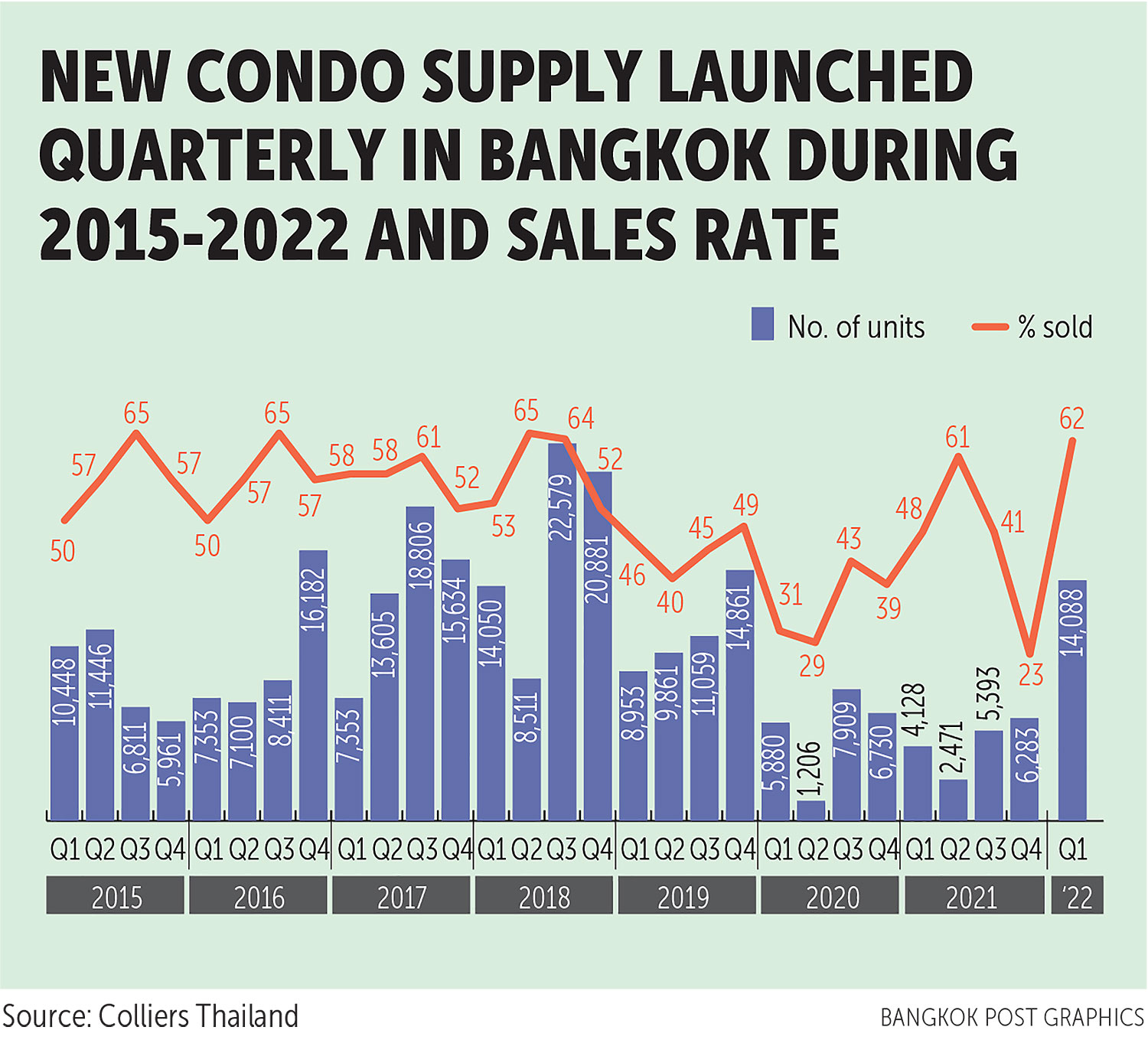 Phattarachai Taweewong, research and communication director of Colliers, said the momentum will continue in the second quarter as Thailand has lifted RT-PCR test requirements upon arrival for vaccinated international travellers from May 1.

"The market became very active in the first quarter because of two positive factors: the loan-to-value [LTV] ratio for mortgage lending eased in October and the country's reopening on Nov 1, 2021," he said.

According to Colliers, there were 16 new condo projects with a total of 14,088 units worth over 34.6 billion baht launched in the first quarter, the largest since the fourth quarter of 2019, soaring over 3.4 times from the same period last year.

More than half of the new supply was from listed developers, with 8,022 units worth 24.6 billion baht.

The outskirts of Bangkok were the most popular locations with 10 projects and a total of 5,732 units launched, which accounted for 41%, followed by eastern Bangkok and Bang Na with 5,007 units from only one project.

"This project [with 5,007 units] had a sales rate of over 90% during the launch period as the sales price was only 1.2 million baht per unit, or around 43,000 baht per square metre," said Mr Phattarachai.

These figures suggest the Bangkok condo market is active again, particularly in the lower-priced segment.

Most developers continued launching condo units priced less than 100,000 baht per sq m, similar to the past several quarters, he said.

Despite the large number of launches in the first quarter, the sales rate for the new condo supply was 62%, the highest since the third quarter of 2018. The Bank of Thailand announced at the end of that year a mandate on a new LTV ratio starting in the second quarter of 2019.

"Prices were attractive for buyers and some investors, while many locations were in high demand for specific target customers, like those near hospitals or shopping malls," said Mr Phattarachai.

Colliers expects the new condo supply being launched in Bangkok in the second quarter to exceed 6,000 units.

As a result, the volume of new condo supply in the first half will reach 20,000 units for the first time in many years, he said.

These locations comprise the Orange Line from Ramkhamhaeng to Lam Salee, the Yellow Line along Lat Phrao and Srinakarin roads, and the Pink Line on Ram Intra Road, as well as Kaset-Nawamin and Sukhumvit areas.

Previous Page - Thailand Property Maintenance Fees / CAM Fees Explained
Next Page - Thailand Fully Open from May 1st 2022
Accept and close
By continuing to use our site you consent to the use of cookies as described in our privacy policy.