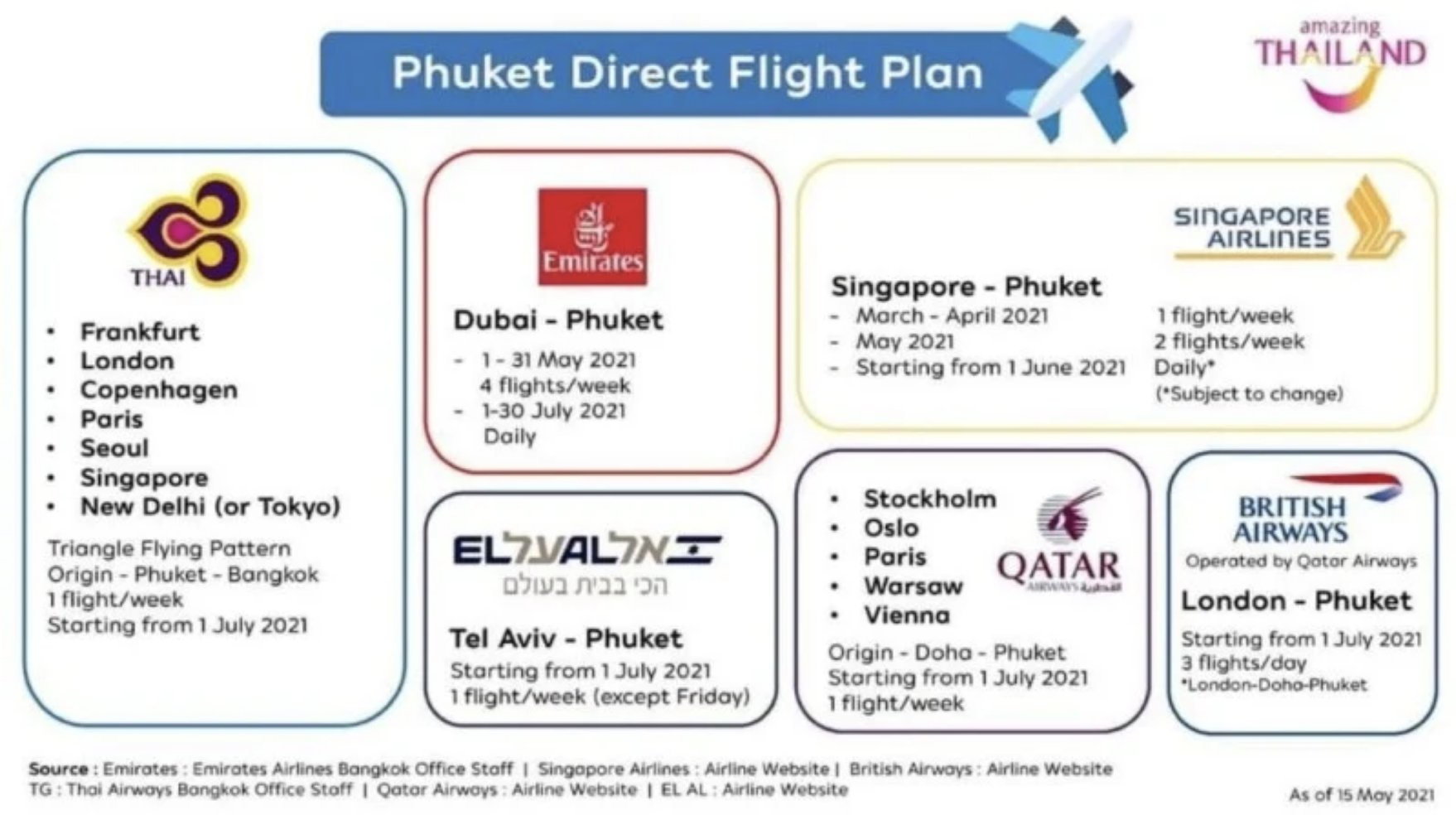 Although Phuket airport has yet to confirm the news, Swiss travel agency Thailand Reisen Reber has confirmed that THAI Airways flight TG973 will depart Zurich at 1:30pm on Saturdays and land in Phuket at 5:55am on Sundays.

The confirmation of the direct flights from Zurich follows THAI Airways announcing the airline will offer from July 1 direct flights to Phuket from Paris, Frankfurt, London and Copenhagen.

Under the Phuket Direct Flight Plan shared with major tour operators THAI Airways from July 1 will also operate direct flights to Phuket from Seoul, Singapore and New Delhi (or Tokyo).

Qatar Airways from July 1 will operate one flight a week from Stockholm, Oslo, Paris, Warsaw and Vienna via Doha to Phuket.

Also under the plan, British Airways  in conjunction with Qatar Airways from July 1 will fly three flights a day London-Doha-Phuket.

The information shared with major tour operators explained the conditions for international tourists being allowed to arrive in Phuket without being required to serve any period of quarantine exactly as explained by TAT Governor Yuthasak Supasorn in an official letter issued last Thursday (May 27).

Not explained in the TAT’s latest announcements is that vaccinated international tourists will need to be issued a Certificate of Entry from a Thai embassy, as announced by the TAT itself late last month in launching its ‘Entry Thailand’ app to facilitate tourists coming into the country.

Also not clarified is whether vaccinated international tourists arriving in Phuket will be required to have health insurance valued at US$100,000.

Arrivals must be fully vaccinated and must be able to show RT-PCR test results issued within 72 hours before boarding the flight proving the passenger has tested negative for COVID-19.

The countries that international tourists will be allowed to arrive from must also be “medium- to low risk countries”, the TAT added.

International tourist arrivals must spend seven nights in Phuket before being allowed to leave the island. During that time the tourists will be allowed to move freely about Phuket.

Arrivals will be required to undergo a RT-PCR test on their fifth day of stay, at the expense of the traveller. If they test negative, they will be allowed to leave the island on day trips to Phi Phi Island, Koh Yao Island and other locations on Phang Nga Bay.

All international arrivals must be booked to stay at accommodation venues approved by the TAT’s Amazing Thailand Safety & Health Administration (SHA), and all tours and tourism business services used by tourists must also be SHA approved, the TAT noted.

All arrivals must install the ‘Thailand Plus’ app on their phone and enable location sharing for the whole duration of their stay.

Siripakorn Cheawsamoot, TAT Deputy Governor for Europe, Africa, the Middle East and the Americas, said tourism demand during the initial stage of the ‘Phuket Sandbox’ reopening is expected to be soft because of tight travel restrictions in both Thailand and some tourist origin countries.

Regardless, the plan remains to reopen Khao Lak and Krabi from August 1, the TAT told tour operators, ahead of opening the rest of the country from October 1.

Previous Page - Countdown to Phuket Opening - July 1st
Accept and close
By continuing to use our site you consent to the use of cookies as described in our privacy policy.