Phuket has several seasons based on tourism and weather conditions and prices are highest in Peak season and lowest in low season now known as “Summer season”. Generally speaking they are: 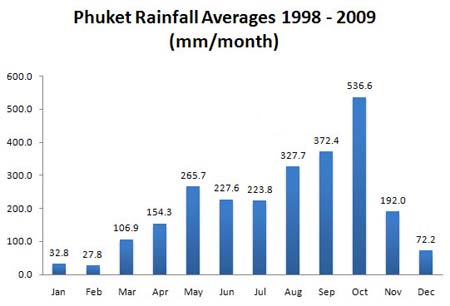 High season starts in November and moves into Peak season during Christmas and New Year which are the driest months.

April is start of low season and the hottest month and the beginning of the temporary rainy season marked by Songkran water festival with temperatures in high 90’s and official start of the Thai New Year.

May,  June,  July is the real start of the monsoon season and much misunderstood as it is particularly pleasant cooler period with temperatures down to 30 degrees. Locally now known as “Summer season” as quieter and great deals on hotels etc.

August start of European holidays is mixed weather, great for board, kite and wind surfing.

September, October are the wettest months but tend to be night rain storms and short sharp bursts of rain in the day which clear in minutes when the sun returns.

Previous Page - Travel
Next Page - Attractions
Accept and close
By continuing to use our site you consent to the use of cookies as described in our privacy policy.