According to CBRE Thailand latest Bangkok Overall MarketView Q4 2014, record-breaking prices of over THB 300,000 per sq.m. have been achieved in five downtown condominium projects in 2014.

This reinforced our belief that the downtown condominium sector is a low-volume high-value market with limited new supply. said CBRE.

The number of condominium units launched increased by 281% Q-o-Q in the downtown area and 13% Q-o-Q in the midtown/suburban area. 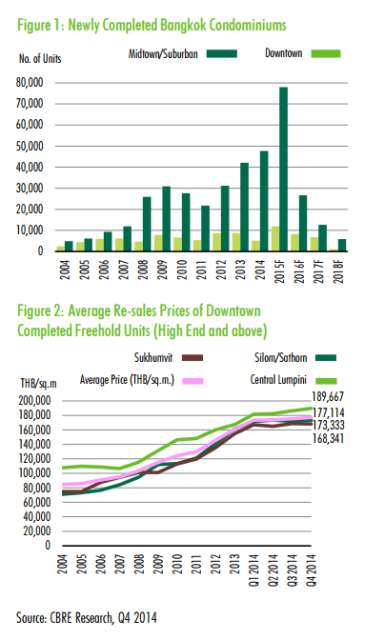 Due to political turmoil in the first half of the year, the total number of condominiums launched throughout 2014 decreased by 37% in the downtown market and 29% in the midtown/suburban market, compared to 2013.

The hot spot for midtown/suburban condominium launches in 2014 was along the MRT’s Purple Line. Throughout the year, 7,500 units were launched in this area, accounting for 58% of newly launched units along under-construction mass transit lines.

This has pushed developers to search for new locations along other under-construction mass transit lines where there is less competition.

Still, the key issues in the midtown/suburban market are how many speculative condominium buyers will default if they cannot resell before completion and how many end-user buyers will be able to get mortgage loans with tightened banks’ criteria.


Read more at http://www.thailand-business-news.com/news/featured/50599-bangkok-condo-market-reaches-record-prices-in-q4-2014.html#wMpC20f02Q8p2fvJ.99
Previous Page - PM seeks King's approval to lift martial law
Next Page - Japan likely to decide for Thai railway project
Accept and close
By continuing to use our site you consent to the use of cookies as described in our privacy policy.