A FOUR-BEDROOM VILLA WITH WATER VIEWS IN PHUKET, THAILAND 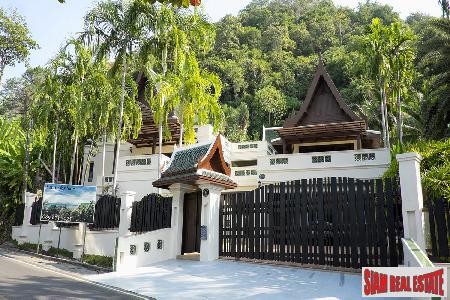 This Thai-style villa has bedrooms and living areas divided among several structures, or pavilions, that rise along a sloping lot of just under an acre overlooking Chalong Bay in Phuket, a province in Thailand and the country’s largest island. The walled-in complex, which has about 4,400 square feet of interior space and almost 6,500 square feet of decks and balconies, has a swimming pool of around 750 square feet and views of the ocean and Phuket’s famous Big Buddha.

The highest of the pavilions contains the principal open-plan living areas and overlooks the pool and extensive decks, which also have a large in-ground whirlpool. The living room has floor-to-ceiling windows and vaulted ceilings paneled in timber and adjoins the dining room and kitchen, said Paul Moorhouse, an owner of the villa. The living room has a 46-inch television that can be retracted into an entertainment unit to preserve panoramic ocean views. The villa’s furniture is included in the asking price. The custom-built kitchen has dark wooden cabinets, black granite countertops and stainless-steel appliances.

Also on this level, a traditional open-sided Thai sala or pavilion of about 860 square feet has a full bar, refrigeration, an entertainment area, bathroom and powder room.  A dining table can seat seven people, and there is a high-end sound system, Mr. Moorhouse said.

About half of the lot is landscaped with waterfalls, statues and gardens of palms, ferns, orchids and orange jasmine, with several hundred garden lights, he said. Natural stone steps pass a lily pond.

Another pavilion houses the master suite. With floor-to-ceiling windows and a vaulted timber-paneled ceiling, the master bedroom has hardwood floors and teak accents. It also has two private terraces, Mr. Moorhouse said. Besides en-suite bathrooms with Jacuzzi tubs, all four bedrooms have surround-sound home theater systems and 46-inch televisions.

The next pavilion is two stories, with a bedroom suite offering sea views on each floor. One suite also has a sitting area, a kitchenette and walk-in closets. A pavilion at street level has a fourth bedroom suite over a two-car garage and storage area. The villa’s pavilions have ducted air-conditioning and ceiling fans. Tap water is treated and potable. The villa complex has a home security system and electronic gates with a separate pedestrian entrance at street level.

Phuket is a Thai province that consists of the 220-square-mile island of Phuket, linked by causeway to the mainland, and 32 smaller islands. This villa is on Cape Panwa at the southern end of Phuket island, near the Phuket Aquarium.   There is a white-sand beach, with beach bars and boat moorings, across the street, just steps from the villa. It’s about a 15-minute drive from the city of Phuket, with about 76,000 residents, which has restaurants, bars, art galleries and shops. The international airport is about 50 minutes away by car.

A military coup in Thailand in May and the imposition of martial law, which continues, slowed property sales, but they have rebounded since the beginning of this year, according to Richard Lusted, the chief executive of the Phuket-based brokerage Siam Real Estate, which has this listing.

The price index for single-family detached homes in Thailand has grown every year since 2008 by 1 percent to 5.4 percent, according to housing data from the Bank of Thailand. The price indexes for condominiums, townhouses and land have grown even more quickly over that period, frequently in the range of 5 percent to 12 percent a year.

Many buyers are looking for lower-cost “off-plan” or brand-new villas with two to three bedrooms and a pool on modest plots of land in boutique developments, Mr. Lusted said. Those homes typically range in price from about 7 million to 16 million baht, or roughly $217,000 to $496,000.

However, villas in Phuket can range up well beyond the million-dollar range, such as the one listed here, and that market, which is largely made up of cash buyers, has thrived even in challenging economic times, Ms. Adenius said. “While buyers previously looked for properties on the traditionally-favored west coast of the island, Phuket’s south and east coast have surged in popularity as an upmarket alternative,” she said.

Foreign buyers also seek homes in Bangkok, the resort areas of Pattaya and Hua Hin, the island of Koh Samui and the northern city of Chiang Mai, agents said.  Chiang Mai has become a popular destination for retirees seeking houses that are more affordable, said Simon Bradshaw, a director of Perfect Homes, a brokerage there. Most foreign buyers in Chiang Mai look for three-bedroom three-bathroom homes on the outskirts of the city, which range in price from 2 million to 6 million baht, or roughly $60,000 to $185,000. “The coastal towns are much more popular, but many people move to Chiang Mai after the honeymoon period of the beaches wears off,” Mr. Bradshaw said.

WHO BUYS IN THAILAND

Foreign home buyers in Thailand historically have come in the largest numbers from Britain, Europe, the United States, Hong Kong and Singapore, agents said.  More recently, buyers have come from the Middle East, India and China, Ms. Adenius said.  Mr. Lusted said he also sees buyers from Australasia and Korea. Russians were recently also buying Thai homes in large numbers until the ruble’s value tumbled last year, agents said.  In Phuket, Ms. Adenius said she is working with more buyers who are part-time residents and commute to Hong Kong and Singapore for work.

Under Thai law, foreign home buyers can own buildings, including condos, but not land in their name, agents said.  A common arrangement is for home buyers to purchase the home together with a lease for the land. Usually the lease is for a period of 30 years with two opportunities for 30-year extensions. “Often the deal includes a purchase option for the land that could be exercised in the event the laws of foreign ownership changed or you sold the property on to a Thai person or legal entity,” Ms. Adenius said.

Another option for a foreigner owning a Thai business is to buy the land through the company, Mr. Lusted said. But a former practice in which foreigners set up companies solely to purchase land has been phased out for the most part, agents said. Legal fees typically amount to several hundred dollars, and registering the lease at the land office costs 1 percent of the lease value, Mr. Bradshaw said. The transfer tax, typically paid by the buyer, is 5.3 percent if the property had previously been sold within the past five years, or 2 percent if the property is new or had not been sold in the previous five years, Mr. Lusted said.

There are no property taxes on this home.

Previous Page - Improved situation spurs tourism growth
Next Page - Most people believe Thailand not ready for elections, poll shows
Accept and close
By continuing to use our site you consent to the use of cookies as described in our privacy policy.